Traffic is down to two 12-foot lanes, using the southbound lanes of US 23 at Ivel in Floyd County following a slide that started Wednesday evening, May 11. Wide loads are now prohibited in the area.

Highway District 12 Chief District Engineer Mary Westfall-Holbrook said the slide area is within sight of the 7.0 mile marker of the northbound lanes between Davidson Memorial Gardens and the Ivel Post Office.

“The hillside is not stable,” she said, “even though we have cleaned the pavement. You can see and hear the rock and earth moving up on the hill. We cannot put traffic on the northbound lanes while there is still any danger that more material could come down.”

Westfall-Holbrook estimated it could take two months to correct the situation. In the meantime, any wide loads – vehicles that have to have a permit from the Division of Motor Carriers – need to go around the area. There is no marked detour. “They may have to go as far as Hazard in one direction or as far as Charleston in the other direction,” she said. “They will have to figure that out themselves.”

She said the team at District 12 and the Kentucky Transportation Cabinet recognizes that this will be a significant inconvenience for what could be a prolonged period of time, but pointed out that District 12’s job is to protect the traveling public, even if that means temporary inconvenience for some drivers.

“We located what we believe to be the source of the water,” she said, “which is off state right of way on private property. That means we have to get our right of way people involved before we can do any excavation to see what needs to be done to fix the problem. We are not talking a short-term fix here,” she explained.

Meanwhile, the two 12-foot southbound lanes are carrying two-way traffic on the busiest stretch of highway in Eastern Kentucky. “The speed limit is 55,” Westfall-Holbrook said, “but people are not slowing down, despite the radar trailers, the variable message boards, and the cones that direct northbound traffic into the southbound lane. If people do not slow down, they are risking their lives and property and the lives and property of others.”

She said that vehicles are hitting cones and ignoring the reduced speed warnings. “If they don’t slow down, someone is going to get hurt,” she warned.

She praised the law enforcement agencies who are assisting with traffic control: City of Prestonsburg Police Department, Floyd County Sheriff’s Office, Kentucky State Police, and Kentucky Vehicle Enforcement. She also praised the work of the Allen and Betsy Layne Volunteer Fire Departments. “They came out Wednesday night and stay with us, directing traffic and generally helping our crews make the area safe enough to re-open two of the four lanes.”

Updates on the situation will be made as soon as additional information is available. Once excavation begins to tackle a permanent fix for the problem, it is possible that the entire roadway at that site may have to be shut down for a period of time. Sara George, Information Officer for the district, said people can look to the media for updated information, check on KYTC District 12’s Facebook page (https://www.facebook.com/KYTCDistrict1212/), or follow KYTC District 12 on Twitter (@KYTCDistrict12). 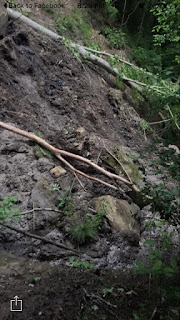 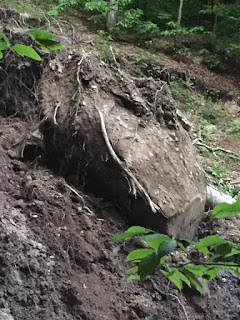 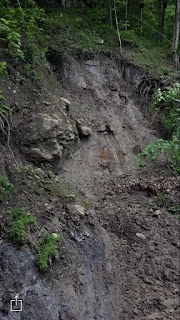